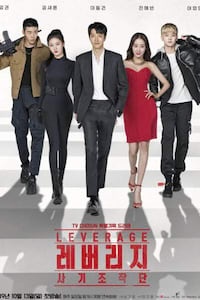 The series follows the story of Lee Tae-joon, a former insurance investigator who forms a team of thieves and con artists to target the rich and wealthy. The team was also formed to avenge Tae-joon's son's death.

[About]
Leverage is a 2019 South Korean television series starring Lee Dong-gun, Jeon Hye-bin, Kim Sae-ron, Kim Kwon and Yeo Hoe-hyun. It is a remake of the American TV series of the same name. It aired on TV Chosun from October 13 to December 8, 2019.