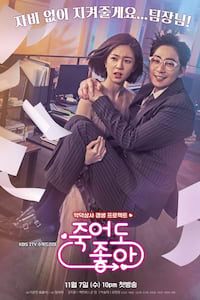 The story of “evil boss” Baek Jin-sang and assistant manager Lee Roo-da, who tries to transform him into a better person. Both of them are stuck in a time loop and they are trying to find the problem that is causing this.

[About]
Feel Good to Die is a 2018 South Korean television series based on the Daum webcomic of the same name, starring Kang Ji-hwan, Baek Jin-hee and Gong Myung. It aired on KBS2's Wednesdays and Thursdays at 22:00 (KST) time slot, from November 7 to December 27, 2018.