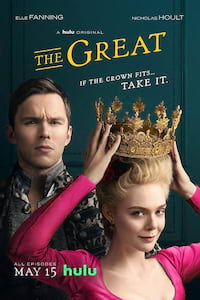 Biography, Comedy, Drama
Be the first to rate this

The Great is a satirical, comedic drama about the rise of Catherine the Great from outsider to the longest-reigning female ruler in Russia's history. The series is fictionalized and portrays Catherine in her youth and marriage with Emperor Peter III (amalgamated with Peter II[4]) focusing on the plot to kill her depraved and dangerous husband.

[About]
The Great is a 2020 comedy-drama television series described by its commissioner Hulu as 'anti-historical' loosely based on the rise to power of Catherine the Great, Empress of All Russia. All 10 episodes of the first season were released on Hulu on May 15, 2020. The series stars Elle Fanning as Empress Catherine II and Nicholas Hoult as the Emperor Peter III.

In July 2020, Hulu renewed the series for a second season.