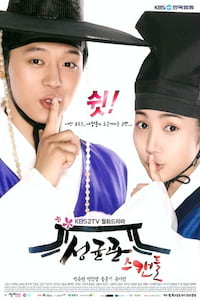 Set during an era when society does not allow females to be educated nor employed, Kim Yoon-hee (Park Min-young) disguises herself as her brother, Kim Yoon-shik, in order to make ends meet for her family. She goes through a series of odd jobs, mainly at a local bookstore, before she gets offered a chance to increase her earnings by becoming a substitute test-taker (an illegal act) for the upcoming entrance examination in the prestigious Sungkyunkwan, the Joseon Dynasty's highest educational institute. She gets caught by the upright Lee Sun-joon (Park Yoo-chun), who later acknowledges Yoon-hee's talents, and even encourages her to enroll in the university. There, she must bear with the endless mischief of upperclassman Gu Yong-ha (Song Joong-ki), put up with the constant mood swings of roommate Moon Jae-shin (Yoo Ah-in), avoid getting in trouble with the strict student body president Ha In-soo (Jun Tae-soo), keep her secret from being discovered, all the while trying to hold her growing feelings for Lee Sun-joon at bay.

Together, Kim, Lee, Gu, and Moon form the "Jalgeum Quartet".

[About:]
Sungkyunkwan Scandal is a South Korean historical drama starring Park Min-young, Park Yoo-chun, Yoo Ah-in and Song Joong-ki. Directed by Kim Won-seok and written by Kim Tae-hee, it is based on Jung Eun-gwol's bestselling 2007 novel The Lives of Sungkyunkwan Confucian Scholars. It aired on KBS2 from August 30 to November 2, 2010 on Mondays and Tuesdays at 21:55 for 20 episodes.