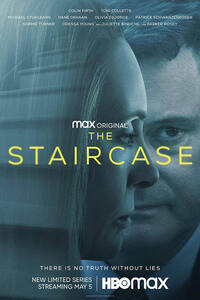 Michael Peterson, a crime novelist, is accused of bludgeoning his wife Kathleen to death after she is found dead at the bottom of a staircase in their home.

[About:]
The Staircase is an upcoming American true crime drama streaming television miniseries created and written by Antonio Campos and Maggie Cohn, based on the 2004 true crime docuseries of the same name created by Jean-Xavier de Lestrade. The series stars Colin Firth as Michael Peterson, a writer convicted of murdering his wife Kathleen Peterson (Toni Collette), who was found dead at the bottom of the staircase in their home. The series is set to premiere on HBO Max on May 5, 2022.