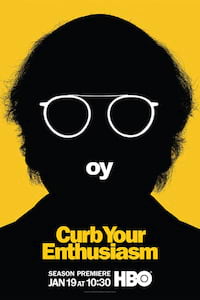 David has explained the show's name in TV interviews as reflecting his perception that many people seem to live their lives projecting false enthusiasm, which he believes is used to imply that "they are better than you". This conflicts with his dry style. The title also urges the audience not to expect too much from the show; at the time of the premiere, David wanted to lower expectations after his earlier success in the entertainment industry. [cont.]

[About]
Curb Your Enthusiasm is an American comedy television series produced and broadcast by HBO that premiered on October 15, 2000. The series was created by Larry David, who stars as a fictionalized version of himself. The series follows Larry in his life as a semi-retired television writer and producer in Los Angeles, and for one season, New York City. Also starring are Cheryl Hines as his wife Cheryl, Jeff Garlin as his manager and best friend Jeff Greene, and Susie Essman as Jeff's wife Susie. Curb Your Enthusiasm often features guest stars, many of them playing fictionalized versions of themselves. [cont.]