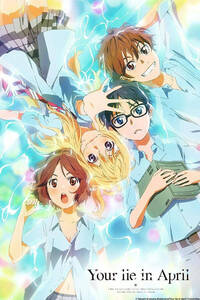 Your Lie in April is a Japanese romantic drama manga series written and illustrated by Naoshi Arakawa. It has been adapted into an anime television series and multiple stage productions. The manga was serialized in Kodansha's shōnen manga (manga aimed at teenage boys) magazine Monthly Shōnen Magazine from April 2011 to May 2015. The story follows a young pianist named Kо̄sei Arima, who loses the ability to hear the piano after his mother's death and his experiences after he meets violinist Kaori Miyazono.

The series originated from a one-shot Arakawa entered in a competition. After serializing another manga series, Arakawa used it as a base for the series, as well as taking some inspiration from other similar works, like Beck and Nodame Cantabile. An anime television series adaptation by A-1 Pictures aired from October 2014 to March 2015 on Fuji TV's Noitamina block and an original video animation (OVA) episode was released in May 2015. A live-action film adaptation of the same name was released in September 2016. The series has also been adapted into a stage play, a light novel, and a musical, which is set to premiere in May 2022.

The manga series received mixed reviews, with several critics praising the plot and characters, while also criticizing the artwork. In contrast to the manga, the anime adaptation was largely acclaimed by critics for its plot, animation, and soundtrack.