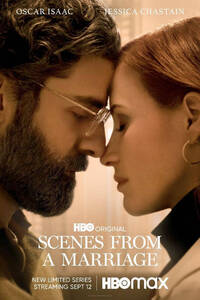 Scenes from a Marriage is an American drama television miniseries developed, written and directed by Hagai Levi produced for HBO and starring Oscar Isaac and Jessica Chastain. It is an English-language remake of the 1973 Swedish miniseries of the same name by Ingmar Bergman. It was presented at the 2021 Venice Film Festival and it premiered on September 12, 2021 on HBO.