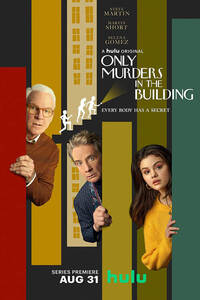 Comey, Crime, Mystery
Be the first to rate this

Only Murders in the Building is an upcoming American comedy television series, created by Steve Martin and John Hoffman. The series consists of ten episodes and is set to premiere on Hulu on August 31, 2021. Only Murders In The Building follows three strangers, played by Steve Martin, Martin Short, and Selena Gomez, who share an obsession with true crime and suddenly find themselves involved in one.