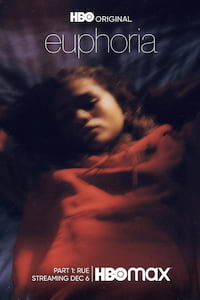 Euphoria is an American teen drama television series created and written by Sam Levinson for HBO. It is loosely based on the Israeli television miniseries of the same name created by Ron Leshem and Daphna Levin. It follows a group of high school students through their experiences of sex, drugs, friendships, love, identity and trauma. The series stars Zendaya in the lead role, alongside an ensemble cast consisting of Maude Apatow, Angus Cloud, Eric Dane, Alexa Demie, Jacob Elordi, Barbie Ferreira, Nika King, Storm Reid, Hunter Schafer, Algee Smith, Sydney Sweeney, and Colman Domingo. It premiered on June 16, 2019. In July 2019, the series was renewed for a second season, preceded by two one-hour specials broadcast in December 2020 and January 2021.

Euphoria has received positive reviews from critics, with praise for its cinematography, story, score, acting (particularly that of Zendaya and Schafer), and approach to its mature subject matter, though it did become the subject of controversy for its use of nudity and sexual content, which some critics perceived to be excessive. The series has received nominations for the British Academy Television Award for Best International Programme, and the TCA Award for Outstanding Achievement in Drama. For her performance, Zendaya has won a Primetime Emmy Award and Satellite Award for Best Actress in a Drama Series.