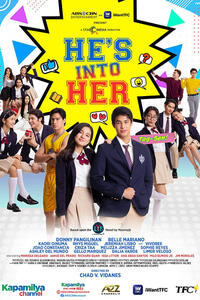 Comedy, Romance, Teen
Be the first to rate this

Maxpein is a spunky provincial girl raised by her grandmother and uncle, after her mother died in Japan when she was 11 years old. Maxpein is surprised when her wealthy father, whom she recently discovered, offers to help pay for her grandmother's hospitalization. Out of gratitude, she agrees to her father's request to live with him and his family in Manila. Maxpein is treated as an unwelcome outsider at Benison International School where she stands up against Deib, the basketball varsity captain. Deib gets their entire batchmates to prank and bully Maxpein, but the more they engage in their game of cat-and-dog one-upmanship, the more Deib realizes that his goal to crush Maxpein's spirit has turned into a love crush for the girl he never thought he would even like. However, the return of the ghosts from their past and their various family problems threaten to ruin Max and Deib's blossoming and fragile romance.

[About:]
He's Into Her is a Philippine teen romantic comedy television series based on the 2013 novel of the same name by Maxinejiji (Maxine Lat Calibuso), starring Donny Pangilinan and Belle Mariano. The series released on iWantTFC on May 28, 2021. The series premiered on television via Kapamilya Channel and A2Z on May 30, 2021 via Yes Weekend! Sunday evening block, replacing Almost Paradise.

The series has been renewed for a second season.