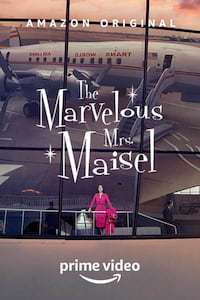 Comedy, Drama
Be the first to rate this

The Marvelous Mrs. Maisel is an American period comedy-drama streaming television series, created by Amy Sherman-Palladino, that premiered on March 17, 2017, on Prime Video. Taking place in the late 1950s and early 1960s, the series stars Rachel Brosnahan as Miriam "Midge" Maisel, a New York housewife who discovers she has a knack for stand-up comedy and pursues a career in it. The rest of the main cast consists of Alex Borstein, Michael Zegen, Marin Hinkle, Tony Shalhoub, Kevin Pollak, Caroline Aaron, and Jane Lynch. Following the premiere of the pilot episode to critical acclaim, the series was picked up by Amazon Studios. The second season was released on December 5, 2018, and the third was released on December 6, 2019. The series was renewed for a fourth season on December 12, 2019.