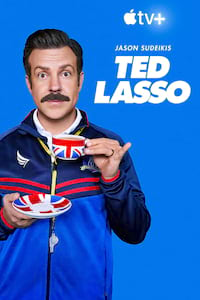 Comedy, Sports
Be the first to rate this

[About:]
Ted Lasso is an American comedy streaming television series developed by Bill Lawrence, Jason Sudeikis, Joe Kelly and Brendan Hunt, based on a character of the same name that Sudeikis first portrayed in a series of promos for NBC Sports' coverage of the Premier League. The series premiered with the first three episodes on Apple TV+ on August 14, 2020, and was renewed for a second season consisting of twelve episodes five days after its premiere. In October 2020, the series was renewed for a third season.