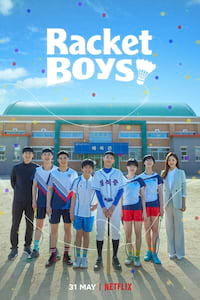 The series is about a middle school badminton club at Haenam Seo Middle School, which is in bad shape. It tells the story of several boys and girls facing challenges as they train to become national level badminton players and how they grow as they participate in a junior athletic championship. Yoon Hyeon-jong (Kim Sang-kyung), a former badminton athlete, and Ra Yeong-ja (Oh Na-ra), a legendary badminton player, now coach these boys and girls, who dream of becoming badminton idols.

[About:]
Racket Boys is a 2021 South Korean Sports drama television series. The series directed by Cho Young-kwang on script of Jung Bo-hun, stars Kim Sang-kyung, Oh Na-ra, Tang Joon-sang, Son Sang-yeon, Choi Hyun-wook, Kim Kang-hoon, Lee Jae-in, and Lee Ji-won. The series follows the growth of sixteen boys and girls and the challenges faced by badminton club of their school. It was premiered on SBS TV on May 31, 2021 and aired every Monday and Tuesday at 22:00 (KST). The series is available worldwide on Netflix for streaming.