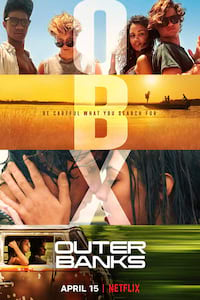 Adventure, Teen Drama, Mystery
Be the first to rate this

Outer Banks follows a group of teenagers in the Outer Banks of North Carolina who are called "Pogues", who live at The Cut, and are determined to find out what happened to the missing father of the group's ringleader, John B. Along the way, they discover a legendary treasure that is tied to John B's father.

Chased by the law and a wealthy and superior group called the "Kooks" from Figure Eight, the Pogues seek to overcome obstacles such as drugs, love, fighting, friendship, money, and the disenfranchisement of being an American teen.

[About]
Outer Banks is an American action-adventure mystery teen drama television series created by Josh Pate, Jonas Pate, and Shannon Burke that premiered via streaming on Netflix on April 15, 2020. In July 2020, the series was renewed for a second season.