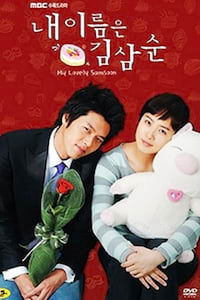 Kim Sam-soon (Kim Sun-a) is loud and brash, yet insecure about her weight. She has always been embarrassed by her old-fashioned first name, and nearing her 30th birthday, she dreams of changing it. She is an excellent baker with a fervent passion for making desserts. On Christmas Eve, Sam-soon gets dumped by her cheating boyfriend (Lee Kyu-han) and loses her job. One of the witnesses to her public humiliation is Hyun Jin-heon (Hyun Bin), the owner of upscale French restaurant Bon Appetit. Upon recognizing her talent, Jin-heon hires her as Bon Appetit's new pastry chef. From their first meeting, the two have an antagonistic relationship (she calls him the equally old-fashioned "Sam-shik"), and sparks fly.[cont.]

[About]
My Lovely Sam-soon (Also known as My Name Is Kim Sam-soon) is a South Korean television series based on the internet novel of the same title by Ji Soo-hyun, which was published on March 9, 2004. Touted as the Korean version of Bridget Jones's Diary, it starred Kim Sun-a (who gained 15 pounds for the role), Hyun Bin, Jung Ryeo-won and Daniel Henney. The series aired on MBC from June 1 to July 21, 2005 on Wednesdays and Thursdays at 21:55 for 16 episodes.

"Sam-soon" is an old-fashioned name in Korean culture. It is translated as "3rd daughter" (sam (삼) is three, soon (순) is meek or feminine).

The romantic comedy-drama series was a huge hit, with an average viewership rating of 37.6%, and its peak rating of 49.1% (for the finale) makes it one of the highest-rated Korean dramas of all time. It also won numerous awards, including the Baeksang Arts Awards Grand Prize for TV, and the Grand Prize at the MBC Drama Awards for Kim Sun-ah