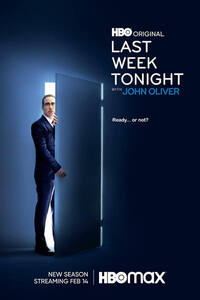 Last Week Tonight with John Oliver (often abridged as Last Week Tonight) is an American late-night talk and news satire television program hosted by comedian John Oliver. The half-hour-long show premiered in April 2014 on HBO. Last Week Tonight shares some similarities with Comedy Central's The Daily Show (where Oliver was previously featured as a correspondent and fill-in host), as it takes a satirical look at news, politics and current events, but on a weekly basis.

Oliver's initial contract with HBO was for two years with an option for extension. In September 2020, HBO announced that the show had been renewed for three additional seasons of 30 episodes each, keeping the show on the air through 2023. The show's eighth season premiered on February 14, 2021.