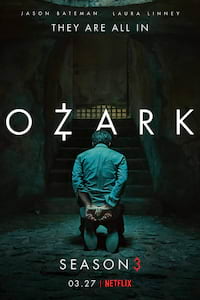 Crime, Drama, Thriller
Be the first to rate this

After a money laundering scheme for a Mexican drug cartel goes wrong, financial advisor Martin "Marty" Byrde proposes to make amends by offering to set up a bigger laundering operation in the Lake of the Ozarks region of central Missouri. Marty suddenly relocates his family from the Chicago suburb of Naperville to the remote summer resort community of Osage Beach, Missouri.[13] When the Byrdes arrive in Missouri, they become entangled with local criminals, including the Langmore and Snell families, and later the Kansas City Mafia.

[About]
Ozark is an American crime drama streaming television series created by Bill Dubuque and Mark Williams for Netflix and produced by Media Rights Capital. The series stars Jason Bateman and Laura Linney as a married couple who relocate their family to the Ozarks for money laundering. Bateman also serves as a director and executive producer for the series. The ten-episode first season was released on July 21, 2017; the ten-episode second season was released on August 31, 2018, and the third season (also ten episodes) was released on March 27, 2020. In June 2020, the series was renewed for a fourth and final season, which will consist of 14 episodes split into two parts.