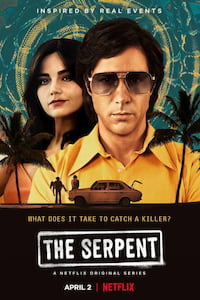 The Serpent is a crime drama serial developed by Mammoth Screen for BBC One and Netflix. It is based on the crimes of serial killer Charles Sobhraj, who murdered young tourists between 1975–1976.

The series was shot on location in Thailand, until the COVID-19 pandemic which halted production for five months from March 2020. Filming was completed in Hertfordshire, England during August 2020. It premiered on BBC One on New Year's Day in 2021 and all eight episodes were immediately made available on BBC iPlayer.