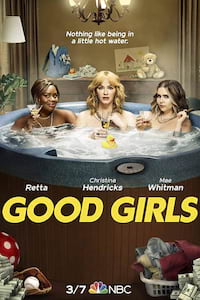 The series follows three suburban Michigan mothers, two of whom are sisters, who are having a hard time trying to make ends meet. They are tired of having everything taken away from them so they decide to pull off an unlikely heist by robbing a supermarket, only to discover that they are in for more than they bargained for. Their successful robbery attracts the attention of the store manager after he recognizes one of the women, but for a different reason altogether than just the money.

[About]
Good Girls is an American crime comedy-drama television series created by Jenna Bans that premiered on NBC on February 26, 2018. The series is executive produced by Bans, Dean Parisot (who directed the pilot), and Jeannine Renshaw for Universal Television. On May 15, 2020, the series was renewed for a fourth season which premiered on March 7, 2021