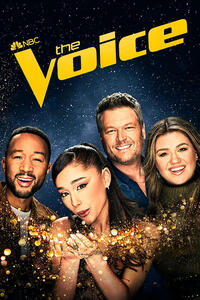 Game Show, Music, Reality-TV
Be the first to rate this

The Voice is an American singing reality competition television series broadcast on NBC. It premiered during the spring television cycle on April 26, 2011. Based on the original The Voice of Holland and part of The Voice franchise, it has aired twenty-one seasons and aims to find unsigned singing talent (solo or duets, professional and amateur) contested by aspiring singers, age 13 or over, drawn from public auditions.

The series employs a panel of four coaches who critique the artists' performances and guide their teams of selected artists through the remainder of the season. They also compete to ensure that their act wins the competition, thus making them the winning coach. The original panel featured Christina Aguilera, CeeLo Green, Adam Levine, and Blake Shelton; the panel for the upcoming twenty-second season will feature Shelton, Gwen Stefani, John Legend and Camila Cabello. Other coaches from previous seasons include Shakira, Usher, Pharrell Williams, Miley Cyrus, Alicia Keys, Jennifer Hudson, Kelly Clarkson, Nick Jonas, and Ariana Grande. In the fifteenth season, Kelsea Ballerini was featured as an off-screen fifth coach for "Comeback Stage" contestants. Bebe Rexha took over as the "Comeback Stage" coach for the sixteenth season.