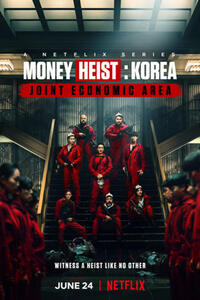 Action, Crime, Drama
Be the first to rate this

The series, being a remake of Spanish TV drama is following the storyline and characters of the original series. The writer has brought in cultural and language changes to plot to give it a fresh flavour. Yoo Ji-tae portraying as 'The Professor', the strategist criminal mastermind, plans to pull off a heist in Korean Peninsula. The operation involves genius strategists and desperadoes with different characteristics and abilities, who have to face unusual situations.

[About]
Money Heist: Korea - Joint Economic Area is an upcoming South Korean television series based on the Spanish heist crime drama series of the same name. The Korean series directed by Kim Hong-sun and written by Ryu Yong-jae, is an original Netflix series, starring Yoo Ji-tae, Park Hae-soo, Jun Jong-seo, Lee Won-jong, and Park Myung-hoon. It depicts a hostage crisis situation set in the Korean Peninsula, involving a genius strategist and people with different personalities and abilities. It is slated to release in 2022 on Netflix.