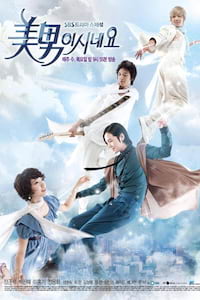 Ko Mi-nyeo (Park Shin-hye) has lived at an orphanage with her twin brother, Ko Mi-nam, since childhood after their father died. Years later, Mi-nam becomes a music idol and Mi-nyeo lives in a junior nun dorm to fulfill her dream of becoming a nun. One day, Mi-nam successfully auditions for and wins the "A.N Entertainment" vocal auditions to join the musical band A.N.Jell. However, he must leave for the United States in order to correct his botched plastic surgery. Mi-nam's manager, Ma Hoon-yi (Kim In-kwon) approaches Mi-nyeo and requests her to pose as Mi-nam for a month till he recovers. Mi-nyeo is against it at first, but eventually agrees, as a path to fame would give the twins an opportunity to find their mother. Thus, Mi-nyeo poses as her brother and joins the band A.N.Jell, where she meets its members: the arrogant Hwang Tae-kyung (Jang Keun-suk), the gentle Kang Shin-woo (Jung Yong-hwa) and the bubbly Jeremy (Lee Hong-gi).

At first, Tae-kyung is against Mi-nam's addition and makes her life hard, while Shin-woo and Jeremy are friendly to her. Eventually, Tae-kyung discovers that Mi-nam is a girl and threatens to reveal it, but Mi-nam manages to win him over. Through their interactions, Tae-kyung began to develop feelings for Mi-nam. Shin-woo and Jeremy also developed feelings for her, even though the latter thinks that Mi-nam is a boy. As Mi-nyeo struggles to hide her secret from the media while performing with A.N.JELL, she discovers her mother's past, which is somehow connected with Tae-kyung.

[About]
You're Beautiful is a 2009 South Korean television series, starring Jang Keun-suk, Park Shin-hye, Jung Yong-hwa of CN Blue and Lee Hong-gi of F.T. Island. The series follows fictional musician band, A.N.JELL and how the relationship between its members changes when a girl posing as her twin brother joins the band. It aired on SBS from October 7 to November 26, for 16 episodes.