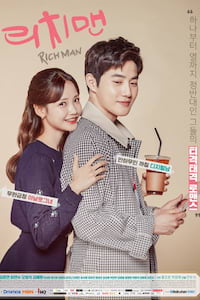 This is a romance story about Lee Yoo-chan (Kim Jun-myeon), a genius programmer and CEO of IT company Next In who can't recognize the face of his first love, Kim Boon-hong, because of his facial recognition disability and Kim Bo-ra (Ha Yeon-soo), a college student who has an AlphaGo-like memory and is an aspiring job-seeker.  At a recruitment meeting for dozens of people aspiring to work at Next In, Yoo-chan humiliates many of the attendees and in particular picks on Bo-ra, even after she spectacularly demonstrates her remarkable memory. But instead of slinking away like many of the applicants, she stands up to him. Just before he makes her leave, after sarcastically nicknaming her the "Queen of Rote Memory", she tells him that her name is Kim Boon-hong. This troubles Yoo-chan. A couple of days later, Next In executives decide they need to employ someone with a photographic memory. They search for Kim Boon-hong's resume but although they cannot find it at first, Min Tae-joo (Oh Chang-suk), Yoo-chan's friend and company co-founder, recognizes Bo-ra's photograph. This leads to a short-term offer of a job to Bo-ra.

[About]
Rich Man is a 2018 television series starring Kim Jun-myeon, Ha Yeon-soo, Oh Chang-suk and Kim Ye-won. It is a remake of the 2012 Japanese television series Rich Man, Poor Woman. The drama is aired on MBN and Dramax starting May 9, 2018 on Wednesdays and Thursdays at 23:00 (KST) time slot.