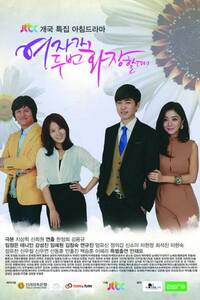 Suzy Hamilton (Im Jung-eun), who was adopted by Americans when she was young, falls in love with Joon-soo (Kang Sung-jin) and gets pregnant. When he abandons her and goes back to South Korea, she follows him and meets a rich woman named Young-woo (Ahn Jae-mo). With her help, she prepares her revenge. During the process, she falls in love with Han Sun-woo (Danny Ahn), Young-woo's brother.