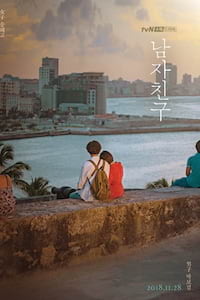 Brought together by fate, a woman who seems to have everything and a young man who seems to have nothing decide to give up an ordinary life to be together. Cha Soo-hyun (Song Hye-kyo), daughter of a politician, lives a pathetic life guided by others. She was sold off (married to) to a rich family, only to divorce her husband because of his affairs. As a divorce condition of her former mother-in-law, Soo-hyun has to attend all her functions.

One day while on a business trip in Cuba, she meets Kim Jin-hyuk (Park Bo-gum), a free-spirited guy. They spend time together. After they go back to South Korea, he meets her again but as an employee in the Donghwa Hotel, which she received as alimony. They are attracted to each other, yet only their fate will decide whether they can live with each other.


[About:]
Encounter is a 2018 South Korean television series starring Song Hye-kyo and Park Bo-gum. It aired on tvN's Wednesdays and Thursdays at 21:30 (KST) time slot from November 28, 2018 to January 24, 2019 for 16 episodes. It is one of the highest rated Korean dramas in cable television history airing on weekdays.

Internationally, the series streams via ViuTV and Viki, and has been sold to Now TV of Hong Kong, tvN Asia of Singapore, Malaysia, Indonesia When Shown Telecast within 24 Hours Express From Korea, Starhub of Singapore, 8TV of Malaysia, Channel 7 of Thailand, FOX, iQiyi and TTV of Taiwan and ABS-CBN of the Philippines, as well as Mnet Japan which will air it in over 100 countries.