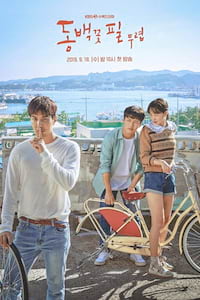 When the Camellia Blooms is the story of Oh Dong-baek, a single mother who moves to the fictional town of Ongsan and opens a bar named Camellia. Six years later, Dong-baek meets playful Yong-sik, who declares his love for her. Dong-baek does not reciprocate his love, but Yong-sik persists in wooing her. When Yong-sik's mother finds out about this, she strongly opposes it, as Dong-baek is a single mother with a son, as well as the fact that Dong-baek's past lover and father of her child is trying to win her back. Yong-sik eventually gets Dong-Baek to fall for him. Meanwhile, a notorious killer sets out to claim Dong-baek as his next victim, and Yong-sik protects her fiercely, doing his job as a policeman and figuring out who the killer is.

When the Camellia Blooms became the highest rated mini-series drama airing in 2019 with a single episode rating of 23.8%. The series was met with praise by critics and audiences for its production and solid actors' performances. It also received favourable reviews for its realistic plot and unique genre combinations of romantic-comedy and thriller. According to Nielsen Korea, the drama also became the second highest rated drama of 2019 with all episodes' average ratings of 14.83% behind SBS's The Fiery Priest. It won multiple awards, including the prestigious Grand Prize for Television at the 56th Baeksang Arts Awards.