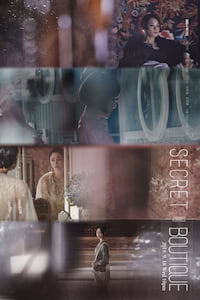 Secret Boutique is a female-centric drama about money, power, revenge and survival.

It follows the story of Jenny Jang (Kim Sun-a), the owner of J-Boutique that looks like a normal clothing and accessories store from the outside, but is actually a secret network connecting the political and business circles to a small law firm that secretly solves problems of the upper class.