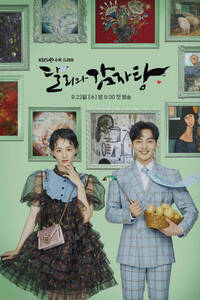 It is about the romance between a parvenu who lacks of education, and the daughter of a prestigious family who tries to save a collapsed art museum.

[About]
Dali and Cocky Prince is an upcoming South Korean television series starring Kim Min-jae and Park Gyu-young. It is scheduled to premiere on KBS2 on September 22, 2021.

The series was originally scheduled to be aired in November and December 2021, but KBS finally decided to premiere it earlier.