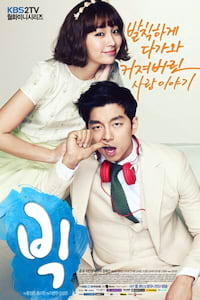 Gil Da-ran (Lee Min-jung) is a struggling substitute teacher trying to get her certificate. She is engaged to a kind and handsome doctor, Seo Yoon-jae (Gong Yoo); it is a fairy-tale-come-true until one month before the wedding, Yoon-jae inexplicably becomes distant. At the same time, Da-ran meets an 18-year-old transfer student from the United States, Kang Kyung-joon (Shin Won-ho), who's got an attitude towards everyone except Da-ran. Kyung-joon gets into a fateful car accident with Yoon-jae and the two of them drive over the guard rail and into the deep waters. Yoon-jae tries to save Kyung-joon but in the process, Yoon-jae ostensibly dies and Kyung-joon ends up in a coma. Kyung-joon soon wakes up finding himself in Yoon-jae's body.

[About]
Big is a 2012 South Korean television series starring Gong Yoo and Lee Min-jung. The romantic comedy/body swap series aired on KBS2 from June 4 to July 24, 2012 on Mondays and Tuesdays at 21:55 for 16 episodes.

Written by the Hong sisters, Big was Gong Yoo's first television series after The 1st Shop of Coffee Prince in 2007 and since being discharged from mandatory military service. Although the drama was initially well-received, it was later heavily criticized for its ending.