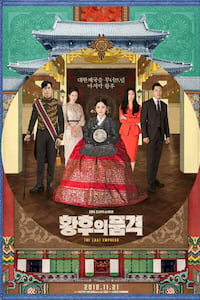 The Last Empress is set in a hypothetical constitutional monarchy in 2018 and follows the life of a musical actress who marries the Emperor of the Korean Empire. She searches for true love and happiness as she contends with palace life, eventually getting entangled in the murder of the emperor's grandmother, leading to the demise of the imperial family.

[About]
The Last Empress is a South Korean television series starring Jang Na-ra, Choi Jin-hyuk, Shin Sung-rok, Lee Elijah, and Shin Eun-kyung. It aired on SBS Wednesdays and Thursdays at the 22:00 KST time slot from November 21, 2018 to February 21, 2019 for 52 episodes.

Originally slated for 48 episodes, The Last Empress was extended to 52 episodes due to its popularity. It received high viewership ratings and positive reviews for its fast-paced and unpredictable plot. On its 24th episode on December 27, 2018, The Last Empress garnered nationwide ratings of 17.9%, making it the highest rating weekday mini-series for Korean terrestrial television in 2018. It surpassed the record previously held by the drama Return.