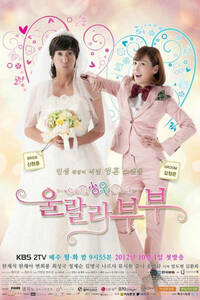 Yeo-ok and Soo-nam's marriage is on the rocks after Yeo-ok catches her hotelier husband cheating on her with another woman. One day, they find that their souls have swapped bodies, and begin to understand each other by experiencing each other's lives.

[About]
Ohlala Couple is a 2012 South Korean romantic comedy gender bender television series starring Kim Jung-eun, Shin Hyun-joon, Han Jae-suk and Han Chae-ah. It aired on KBS2 from October 1 to November 27, 2012 on Mondays and Tuesdays at 21:55 for 18 episodes.