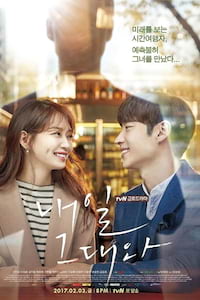 The story revolves around Yoo So-joon (Lee Je-hoon), a CEO of a real estate company, who has the ability to travel through time via a subway; and his wife, Song Ma-rin (Shin Min-a), who works as an amateur photographer. So-joon foresees his future-self die so he decides to marry Ma-rin in order to avoid that fate. As time passes, he learns to love her selflessly.

[About:]
Tomorrow, with You is a 2017 South Korean television series starring Lee Je-hoon and Shin Min-a. It started airing on February 3, 2017 on cable channel tvN every Friday and Saturday at 20:00 (KST).