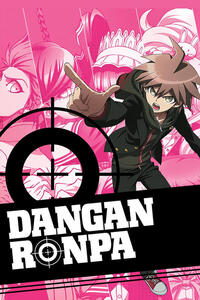 Danganronpa: The Animation follows the events of those of the video game Danganronpa: Trigger Happy Havoc. The series follows 16 high school students locked inside "Hope's Peak Academy," their high school. The students are threatened by an anthropomorphic bear, known as Monokuma, who gives them only one way to leave the Academy, to murder another student, and not be found guilty in the subsequent trial.

[About]
Danganronpa: The Animation is an anime television series produced by Lerche, based on Spike Chunsoft's 2010 video game, Danganronpa: Trigger Happy Havoc. The thirteen episode adaptation aired on MBS' Animeism programming block between July and September 2013. The series is licensed in by Funimation in North America, Madman Entertainment in Australia, Manga Entertainment in Europe, and Muse Communication in Southeast Asia and South Asia. The series was later succeeded by an anime-original sequel to the game series, Danganronpa 3: The End of Hope's Peak High School, which aired in 2016.