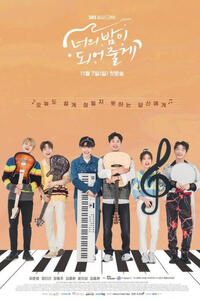 [About:]
Let Me Be Your Knight (Korean: 너의 밤이 되어줄게; RR: Neoui Bam-i Doeeojulge; lit. I'll Be Your Night) is an upcoming South Korean television series directed by Ahn Ji-sook and written by Seo Jeong-eun and Yoo So-won. Starring Jung In-sun alongwith members of fictitious band Luna: Lee Jun-young, Jang Dong-joo, Kim Jong-hyun, Kim Dong-hyun and Yoon Ji-sung, the series depicts a romance between a world star idol suffering from sleepwalking and a resident doctor who has to secretly treat it. The drama is scheduled to premiere on SBS TV on November 7, 2021 and will air every Sunday, at 23:05 (KST). It will also be available for streaming on iQIYI.