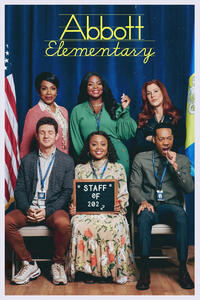 Comedy
Be the first to rate this

Abbott Elementary is an American mockumentary sitcom television series created by Quinta Brunson for ABC. It stars Brunson as a second grade teacher at Abbott Elementary, a fictional Black school in Philadelphia. The ensemble cast includes Tyler James Williams, Janelle James, Lisa Ann Walter, Chris Perfetti, and Sheryl Lee Ralph. The series premiered as a midseason entry in the 2021–22 television season on December 7, 2021, and was met with critical acclaim. In March 2022, the series was renewed for a second season, which is set to premiere on September 21, 2022. The show was nominated for Outstanding Comedy Series at the 74th Primetime Emmy Awards, with Quinta Brunson, Janelle James, Sheryl Lee Ralph, and Tyler James Williams all receiving nominations for their performances.