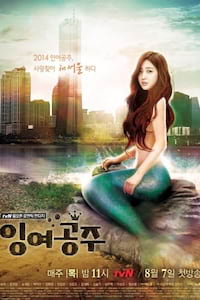 Aileen is a mermaid princess who is in love with Kwon Shi-kyung, a human celebrity chef. While recording a TV show next to the Han River, Shi-kyung hits his head and falls into the river, and Aileen stops him from drowning by kissing him underwater. Shi-kyung is pulled out from the water by Yoon Jin-ah, an intern who works for and is also in love with Shi-kyung. In order to meet Shi-kyung again, Aileen steals a magic potion from the male witch Ahn Ma-nyeo, and is transformed into a human girl. It's only after her transformation that Aileen learns that she has 100 days to find true love, or else she will die and turn into bubbles. Ahn Ma-nyeo helps Aileen by setting her up with the fake identity of "Kim Ha-ni," and sends her to live in a house in Seoul with other young people, most of whom are unemployed and searching for jobs. Among Aileen's new housemates is Lee Hyun-myung, Yoon Jin-ah's ex-boyfriend who is trying to win her back. With her new friends to help her, Aileen vows to find a way to win Shi-kyung's love, but in the end she falls in love with Hyun-myung. Although she initially disappears once her 100 days are up, she returns a year later to see her friends again.

[About]
The Idle Mermaid also known as Surplus Princess is a 2014 South Korean romantic comedy television series starring Jo Bo-ah, On Joo-wan, Song Jae-rim, and Park Ji-soo.  A modern retelling of the 1837 fairy tale "The Little Mermaid" by Hans Christian Andersen, it aired on tvN from August 7 to October 9, 2014 on Thursdays at 23:00. Originally slated to run for 14 episodes, the total number of episodes was reduced to 10. The series inspired an unofficial Indonesian adaptation called Mermaid in Love.