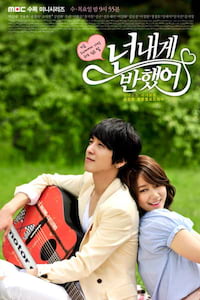 A series of misunderstandings causes Lee Shin (Jung Yong-hwa), the cocky leader of "The Stupid" and Lee Gyu-won (Park Shin-hye), a college student majoring in Traditional Korean Music to start on the wrong foot. Gyu-won does not understand why Lee Shin is so popular, until one day she is forced to go the band's concert with her friends, who are fans of "The Stupid". There, she sees Lee Shin performing live, and is immediately captivated by him. [cont.]

[About]
Heartstrings (You've Fallen for Me) is a 2011 South Korean television series starring Park Shin-hye and Jung Yong-hwa. It aired on MBC from June 29 to August 19, 2011 on Wednesdays and Thursdays at 21:55 for 15 episodes.

Heartstrings is a youth melodrama about love, friendship and dreams, set against the backdrop of a performing arts college. The drama reunited Jung Yong-hwa and Park Shin-hye who both starred in the TV series You're Beautiful (2009).