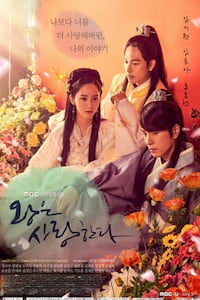 Set in the Goryeo dynasty, it tells the story of a young and ambitious monarch Won (Im Si-wan) with a desire to conquer, and two people who shape his destiny; childhood friend Wang Rin (Hong Jong-hyun) and a beautiful young woman named San (Im Yoon-ah). These three get to know each other and become the closest of friends but feelings of affection and love arise between these three. The young Crown Prince, falls in love with the young woman San and would do anything to save her. He comes to love her more than himself. But on the other hand, is his childhood friend Wang Rin who also fell in love with San at first sight. Even though he loves her so much, he still hid his affection for her because of his duty to his Crown Prince and because he doesn't want to hurt his best friend's feelings. But the time came when San realizes her feelings for Rin and vice versa.


[About:]
'The King Loves' also known as The King Is in Love, is a South Korean historical drama directed by Kim Sang-hyeop with screenplay by Song Ji-na, Park Chan-kyung and No Sun-jae, based on the novel of the same name by Kim Yi-ryung. It stars Im Si-wan, Im Yoon-ah and Hong Jong-hyun. The pre-produced drama aired on MBC from July 17, 2017 to September 19, 2017 on Mondays and Tuesdays.