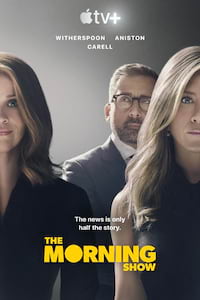 Alex Levy anchors The Morning Show, a popular breakfast news program broadcast from Manhattan on the UBA network that has excellent viewership ratings and is perceived to have changed the face of American television.

After her on-air partner of 15 years, Mitch Kessler, is fired amidst a sexual misconduct scandal, Alex fights to retain her job as top news anchor while sparking a rivalry with Bradley Jackson, a haphazard field reporter whose series of impulsive decisions bring her into a new world of television journalism.

[About:]
The Morning Show (also known as Morning Wars in Australia and Indonesia) is an American drama streaming television series starring Jennifer Aniston, Reese Witherspoon, and Steve Carell, that premiered on Apple TV+ on November 1, 2019. The series is inspired by Brian Stelter's book Top of the Morning: Inside the Cutthroat World of Morning TV.