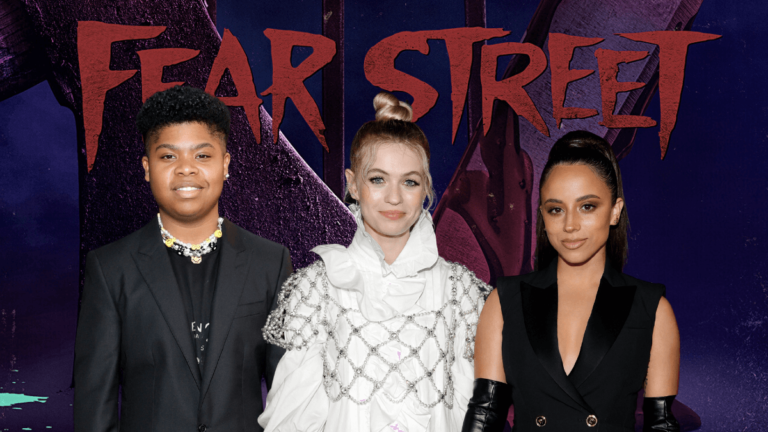 'Fear Street Part 1: 1994' is now streaming on Netflix! We chat with lead stars Kiana Madeira, Olivia Welch, and Benjamin Flores Jr. about this three-part thriller based on R.L. Stine's books and how the trilogy is more than just a horror story.

If ‘Fear Street’ was a staple read of your childhood, then you’re in for a thrilling treat as author R.L. Stine’s iconic books come to life on Netflix. ‘Fear Street Part 1: 1994‘ is now streaming, with Part 2: 1978 and Part 3: 1666 unleashing on July 9 and 16, respectively. The trilogy spans 300 years bringing us back to Shadyside’s sinister beginnings.

The books themselves were geared for teens, and looking back, the amount of subversive, edgy horror seeping into every novel was leaning towards an R-rating. The same can be said for the Netflix adaptation, where Part 1: 1994 introduces a heavy hand on the gore and bloody violence that will thrill fans of 90s teen slasher films.

‘As a filmmaker making Fear Street, but also just as a movie lover, I was so excited to pay homage to some of the great eras of horror movies,’ shares director Leigh Janiak. ‘For 1994, Scream stood above all rest — it’s peak ’90s horror and, I think, one of the most brilliant movies ever made, period. Then for 1978, I got to look at the heyday of slasher films — Friday the 13th, Halloween, Nightmare on Elm Street. For 1666…I found the best inspiration for me lay in the beautiful world made rotten of Terence Malick’s The New World.’ Janiak herself grew up reading ‘Fear Street’ books and for the trilogy, she directed all three movies at once. Talk about a gorefest.

Leading the Fear Street trilogy are actors Kiana Madeira, Olivia Welch, and Benjamin Flores Jr., who star in all three movies as teens who uncover an ancient evil in their city that has been haunted by terrifying events for generations. We chat with Kiana, Olivia, and Benjie about this three-part thriller based on R.L. Stine’s books as they share their experience filming the trilogy, how the films go beyond horror, and more:

Kiana Madeira: We were familiar with the Goosebumps books growing up, so we were familiar with RL Stine and how creative and imaginative he is. We weren’t familiar with the Fear Street books, but definitely Goosebumps. So we kind of know R.L. Stine’s vibe, which helped a lot. The reason I want it to be a part of the trilogy, there are so many reasons. The fact that I get to play two different characters over the course of three films was really enticing to me. Also the fact that these are horror films, but they’re also funny and they’re also really fun and they’re dramatic and they’re centered around a love story. And a queer love story. And they’re also centered around characters of color and minorities. And I think that that’s so rare to see in this genre. The trilogy is just groundbreaking in so many ways and it’s really exciting as actors to be a part of a project like that.

Olivia Scott Welch: And it was just such a cool, fresh horror script. The things that happen in the movies with the genre elements where I felt like it’s so creative and so imaginative. And then having layered in the love story and the friendship between these friends and all of the messages of society and things like that, it felt very special.

Benjamin Flores, Jr.: Definitely wasn’t just a horror movie. It was a lot of movies into one, basically.

Why do you think these films would appeal to young people or people your age? Because in recent years the Young Adult content is not horror. What for you is the main attraction of film for the younger people?

Kiana: I think the fact that these movies are not just horror movies. There’s so much more. Of course, the horror is there and there are slasher films and there’s blood and gore. But at the same time, they are about a group of friends and about two people who love each other. And I think that that’s so relatable. It’s also about a group of people who are considered outsiders. And I think that oftentimes we don’t see that reflection of real life on screen. So these movies are just so different in so many ways. And I think that especially given in the world that we live in today, where people are really taking the time to get in touch with the way that they identify with themselves, it’s important to see that reflected on screen. And I think these movies do such a great job at shining a light on the importance of that. They’re more than just horror films. They’re so layered and so complex.

What was it like working with director Leigh Janiak? How was she on the set and how was the on-set experience for you?

Kiana: Leigh is great. She’s like the only person that could have made these movies too, seriously.

Kiana: She’s like a superwoman. Even in post-production, seeing her work three movies, that’s such a huge undertaking. She somehow showed up to set just like chill, calm, and was so specific about her vision and what she wanted from us as actors and, very communicative. Just like a true captain in every sense. Yeah. Leigh is absolutely amazing

Olivia: She first mentioned them [the trilogy] to me in 2018 and she had already been working on them, and up until she finished the last day of post-production on the third one, she was still so excited about them. It seems so fresh still, even now. She always was excited about them, which is really a cool thing.

Benjie: For real. And it just goes to show how much she loves what she’s doing. If it’s been this long and she’s not out of love with it. She still feels the same joy from doing it and creating it. That’s just dope.