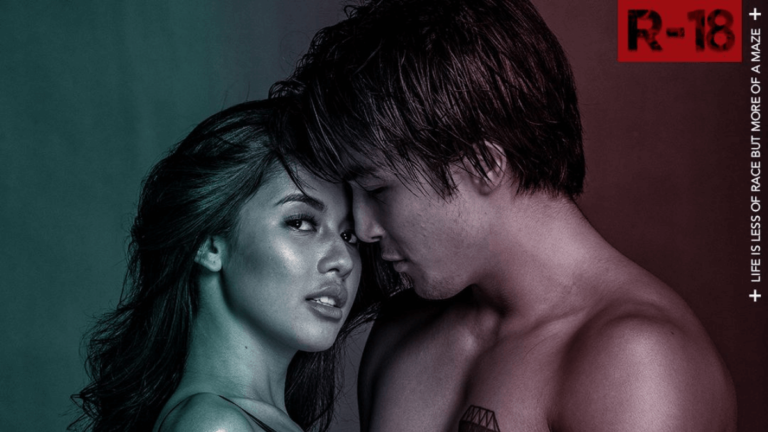 The way the film presents sex in such a cavalier manner is both a strength and a weakness.

It’s refreshing the way that ‘A Girl + A Guy’ strays from the conventions of a romance/comedy. Erik Matti’s film, defined as a ‘romantic sex drama’ in which he states during the Q&A after the film’s advanced online screening, was a means for him to try to understand the younger generation that his kids belong to. The result is the story of Raf and Fiona, who experience devastating breakups with their respective significant others at the beginning of the film, which hurtles them into two very opposite paths to self-discovery.

While Raf (played by Rob Gomez) takes a more sexually invigorated approach to dealing with the breakup: having a sexual relationship with his boss at work and then later on with host of other women; Fiona (played by the rather arresting Alexa Miro) broadens her world by going on vacation and meeting a handsome foreigner and then later goes on dates with other men (and a woman).

It isn’t until after an hour that our two protagonists finally meet and the film takes a completely different, but also welcomed, change of pace and mood.

Even if the first half of the movie is an exploration of the psyche of this younger generation in regards to relationships, sex, and intimacy, hovering just above the man and woman sexual dynamics portrayed in the film is also the exploration of how these interactions affect their work and these character’s sense of identity.

For Raf, the women he has sex with are things he feels entitled to. The film is unapologetic about its depiction of sex and nudity — and that shouldn’t be an issue — what it highlights, though, is how Raf’s multitude of sex montages with women who are neither named nor are their characters explored gives the impression that his rampant sexual appetites have dehumanized these women. All the sex he has is probably consensual (except for one that becomes an important plot point) and their characters may not be important to the story, but seeing it on screen and how Raf goes through them amplifies this dehumanization.

On the other hand, Fiona’s meetups, first with Diego (played by Emilio Francisco), and then a host of Tinder dates that include a woman (played by Rhen Joyce De Guzman) and JP (played by Shaun Salvador), is filled with conversations and genuine attempt to grasp who they are as people. With her scenes juxtaposed against Raf, it really puts Raf in such a bad light (and the behaviour itself).

The way the film presents sex in such a cavalier manner is both a strength and a weakness. On one hand, the film normalizes what probably happens out there in real-world circumstances like Raf’s refusal to use a condom or the frequent sexual exploits in very public spaces — it makes it a topic that we can discuss and admit openly that these happen and assess what we feel about it. But at the same time, most (if not all) of the graphic sexual encounters, while enjoyable for the characters at the time, always leads to a less desirable end.

For one character,  intimacy and sex leads to stagnation, a derailment of their plans. For another character, sex has become the goal and driving force of their character. While the sex is used to define character — how and when and in what conditions — it also equates to unhappiness within the narrative of ‘A Girl + A Guy.’ When the film shifts gears halfway through and it slows down as Raf and Fiona finally meet and experience an all-too-familiar event, the film goes for its true messaging here: that there’s something more than sex and more than love that should be of higher value for us.

That ‘something more’ is the true end goal for both of our characters, who had to stumble and struggle to get to that point. The film scores points for its unconventional filmmaking (saturated colors, odd camera framing, jarring editing, an enchanting soundtrack, heavy use of CGI and effects) that really highlights the departure of the film from the mainstream. The casting, in of itself, is brave (as daring as the actors and actresses willing to bare it all) but it is Alexa Miro who truly stands out. She has a natural way about her that really reels you in and grounds the movie. The rawness of the other performances doesn’t quite work well with the hyper-reality of the filmmaking and storytelling that it brings it down (certain characters could have used a stronger performer to really bring out some scenes) but in delivering something truly different, the director and his writers have definitely achieved it.

––
A Girl and A Guy is now available for streaming via Upstream. You can book your tickets through Lazada and Shopee for P210.

A Girl and A Guy