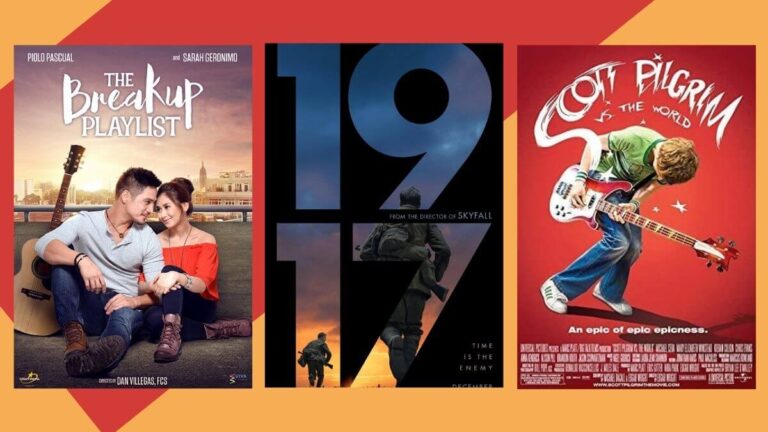 Isn’t it a bummer when you see your favorite movie already playing halfway through when you turn on the TV? Fret not! From rom-com and action to horror and thriller, we’re giving you a heads up on all the must-watch movies on TV from June 21 to 27, 2021.

A Quiet Place
(1:20pm, FOX Movies)
A family struggles for survival in a world where most humans have been killed by blind but noise-sensitive creatures. They are forced to communicate in sign language to keep the creatures at bay.

Tenet
(5:10pm, HBO)
When a few objects that can be manipulated and used as weapons in the future fall into the wrong hands, a CIA operative, known as the Protagonist, must save the world.

In My Life
(9pm, Cinema One)
A headstrong woman moves to New York and must come to terms with her gay son and his lover.

Mean Girls
(1:25pm, HBO)
Cady joins a new public school and befriends Janis and Damian. They warn her to avoid the Plastics, a group led by Regina, but things get worse when she falls in love with Aaron, Regina’s ex-lover.

Shrek 2
(4pm, FOX Movies)
When Shrek and Fiona return from their honeymoon, her parents, the rulers of Far Far Away, invite them over. But as the king does not like Shrek, he enlists a fairy to keep him away from his daughter.

The Panti Sisters
(9pm, Cinema One)
A father announces to his three sons that he is dying of cancer.

Anna
(1:35pm, Cinemax)
Beneath a Russian woman’s striking beauty lies a hidden secret that will unleash her indelible strength and skill and lead to her becoming one of the most feared assassins on the planet.

Dr. Seuss’ The Lorax
(3:45pm, HBO)
Ted, a 12-year-old boy, sets out to search the long-extinct Truffula tree to impress the girl of his dreams. However, in his journey, he has to overcome a number of obstacles.

Mr. & Mrs. Cruz
(7:15pm, PBO)
Raffy and Gela find themselves taking off for Palawan to escape the not so great realities of their current lives and catch up on their respective me-time. But as fate would have it, they find themselves meeting and enjoying each other’s company.

The Time Traveler’s Wife
(3:45pm, HBO)
Henry DeTamble, a librarian, possesses a unique gene that lets him involuntarily travel through time. His wife, Claire Abshire, finds it difficult to cope with it.

Jurassic World: Fallen Kingdom
(5:10pm, FOX Movies)
After a volcano eruption proves to be a threat for the dinosaurs, Owen and Claire reach the defunct Jurassic World, a theme park, to save the animals from extinction.

Love You To The Stars and Back
(7pm, Cinema One)
Feeling out place in her own home, an eccentric and socially awkward girl, Mika, decides to go on a road trip with a very strange goal, to look for aliens. In her trip, Mika accidentally bumps into a simple and good-humoured boy, Caloy, whom she chooses to give a free ride to until he reaches his destination.

The Mall, The Merrier
(5:15pm, PBO)
Two siblings fight for ownership of their parents’ mall.

The Breakup Playlist
(5pm, Cinema One)
A story about an aspiring professional singer and a rock singer who collaborates in a song. As they work on their song, they start to develop feelings for each other.

Scott Pilgrim vs The World
(7 pm, FOX Movies)
Scott Pilgrim meets Ramona and instantly falls in love with her. But when he meets one of her exes at a band competition, he realises that he has to deal with all seven of her exes to woo her.

1917
(7:05pm, HBO)
Two soldiers, assigned the task of delivering a critical message to another battalion, risk their lives for the job in order to prevent them from stepping right into a deadly ambush.

Apollo 13
(4pm, Cinemax)
Astronauts Lovell, Haise and Swigert of the Apollo 13 moon mission find themselves stranded when their spacecraft gets damaged. Soon, NASA tries to bring them back before it is too late.

Madagascar 3: Europe’s Most Wanted
(5:30pm, HBO)
To get back home and evade capture by Animal Control, Alex, Marty, Gloria and Melman embark on a riotous adventure as they join a travelling circus.

A Secret Affair
(7pm, PBO)
Rafi, happy with her partner, Mark, is respected for her beauty and personality. Then a major life decision changes everyone’s opinion about her, and a happy-go-lucky woman captures Mark’s attention.

Transformers
(11:40am, FOX Movies)
The noble Autobots and Decepticons, two intergalactic races of robots, crash land on Earth. They battle for Allspark, the ultimate power source, whose location is held by Sam.

Bridget Jones’s Diary
(11:45am, HBO)
Bridget, a single woman, writes a diary focusing on how she wants to change her life. However, after two romantic encounters, her perspective changes drastically.

Bridget Jones: The Edge Of Reason
(1:20pm, HBO)
Bridget gets uncomfortable in her relationship with Mark after learning that he is averse to change and holds traditional values when it comes to voting. She also struggles to deal with her new boss.

Bridget Jones’s Baby
(3pm, HBO)
After breaking up with Mark, Bridget bumps into a handsome stranger, Jack. Soon, Bridget finds out that she is pregnant and unsure about the identity of her baby’s father.

Finally Found Someone
(7:15pm, PBO)
When a woman is left at the alter, the video goes viral online and a PR rep is hired to help her. In the end, they realise that they have fallen for each other.

Bridget Jones: The Edge of Reason

Scott Pilgrim vs. the World