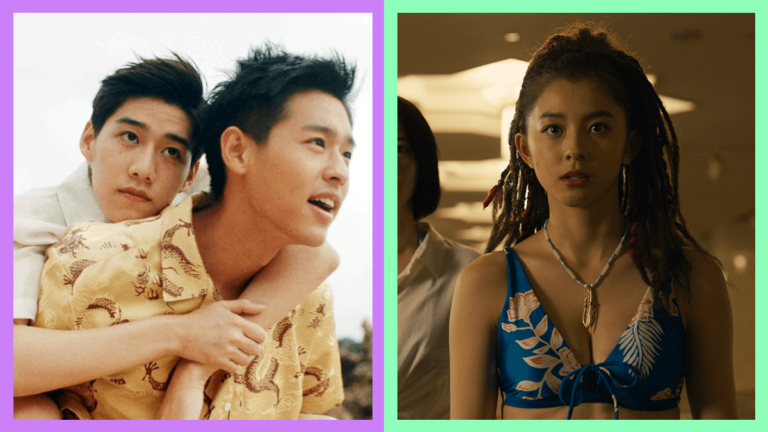 In recent years, the audience of Asian content has seen more LGBTQ+ representations in films and dramas. And while these are still far from perfect, we still take it as a step towards having a more inclusive and accepting community who create and watch content that highlights the stories and the voices of our friends from the LGBTQ+ community.

Just in time for Pride Month this June, we came up with a list of 10 Asian LGBTQ+ dramas that celebrate the stories, the art, and the voices of our friends from the LGBTQ+ community. Check them out below:

Cherry Magic follows Adachi Kiyoshi, a 30-year-old virgin who gains the magical ability to read other people’s minds just by touching them. Not finding his new ability helpful, he’s overwhelmed by this ability. That is all until he accidentally touches Kurosawa Yuichi, who apparently has romantic feelings for him. The drama stars Akaso Eiji, Machida Keita, Asaka Kodai, and more.

Number of Episodes: 12
Where to Watch: WeTV

I Told Sunset About You (Thailand)

I Told Sunset About You is a 2020 BL Drama about Teh and Oh Aew, two schoolboys who used to be childhood best friends until a falling out. Several years later, the two meet again at a Chinese-language tutorial school, realizing that they’re both eyeing the same major at a Bangkok university. Although they started out as rivals, the two end up rebuilding their relationship, forming a new bond that extends beyond friendship. It stars Billkin Putthipong Assaratanakul and PP Kritt Amnuaydechkorn.

A short film called Last Night in Phuket was released last May 20, while the series’ second season, entitled I Promised You the Moon, premiered on May 27 this year.

Set in the neighborhood of Itaewon, Itaewon Class is about Park Saeroyi, who opens his own restaurant in the area as his way to take revenge on the family of the man who fired his dad and caused his expulsion from school. Joining him in his journey to success is a group of young people who all share the same bravado. The drama stars Park Seo Joon, Kim Da Mi, Yoo Jae Myung, Kwon Na Ra, Lee Joo Young, Ahn Bo Hyun, and more.

One of the characters that helped Saeroyi to succeed in the industry is Ma Hyun Y (played by Lee Joo Young), a transgender woman who works as a chef in Danbam. Throughout the course of the drama, the audience gets to see her as she becomes more comfortable with herself, and the rest of the Danbam crew as they come to understand and accept her for who she is.

Number of Episodes: 16
Where to Watch: Netflix

Be Loved in House: I Do (Taiwan)

Be Loved in House: I Do is a Taiwanese BL drama following Jin Yu Zhen, the director of Seisei Studio who enforces a single rule prohibiting relationships and marriages between employees. To show their opposition to the new rule, the employees of Seisei Studio come up with a secret plan: for Shei Lei to find more information on the director’s love life. He eventually finds out that Yu Zhen is lonely and is still hurt by a past relationship. She Lei then finds himself becoming more and more curious about Yu Zhen. This drama stars Aaron Lai, Hank Wang, Liao Wei Po, JN Yu, and more.

Number of Episodes: 12
Where to Watch: WeTV

Manilennials is a Filipino web series centering on 5 millennials as they come to terms with their careers and identities as they deal with the hilarity and absurdity of living in Metro Manila during the 2016 global paradigm shift. This drama stars Ria Atayde, Chai Fonacier, Miss Mela Habijan, Nicco Manalo, and Fifth Solomon.

Number of Episodes: 12
Where to Watch: iWant TFC

This Japanese drama follows Arisu — a video-game-obsessed hikikomori who finds himself in a stranger version of Tokyo where he must compete in dangerous games with his friends to survive. One of the people he meets during the course of the game is Hikari Kuina, a strong and badass transgender woman who plans to steal the cards from the Beach society with Chishiya so they can leave the Borderland.

Number of Episodes: 10
Where to Watch: Netflix

ALSO READ
Loved Netflix’s ‘Alice in Borderland’? Read These Books & Manga Series
12 Japanese Dramas Adapted From Manga That Are Worth a Spot on Your Binge Lists

The Legend of Yun Qian (China)

The Legend of Yun Qian is a Chinese historical GL drama series centers on Mu Yun and Hua Yue — the only disciples left of the Lingchuan Sect, a group that has guarded the Fans of Heaven and Earth for a century. It follows the stubborn Hua Yue who discovers that the Fan of Heaven has the ability to travel through time. She then travels to the future to have fun and escape her martial arts classes with Mu Yun. In the future, she meets Xiao Qian, who looks exactly like Mu Yun.

This Filipino web series tells the story of Karl and Vlad, two people whose lives become entwined by fate as they become housemates over the semestral break. It was also then that they get to learn more about each other and about themselves than they could have ever imagined. Starring in this series are Ian Pangilinan and Paolo Pangilinan.

Transit Girls is a drama from Japan following the relationship between Sayuri and Yui — two girls who must live together under one roof after becoming step sisters. Because of their differences in personalities, the two initially hate each other, but they eventually end up developing feelings for each other. The drama stars Sairi Ito, Sakuma Yui, Ito Kentaro, Yoshikawa Ai, and more.

Do you have any other Asian drama recommendations?

Homestream images are from Nadao Bangkok and Netflix.

I Told Sunset About You

Be Loved in House: I Do