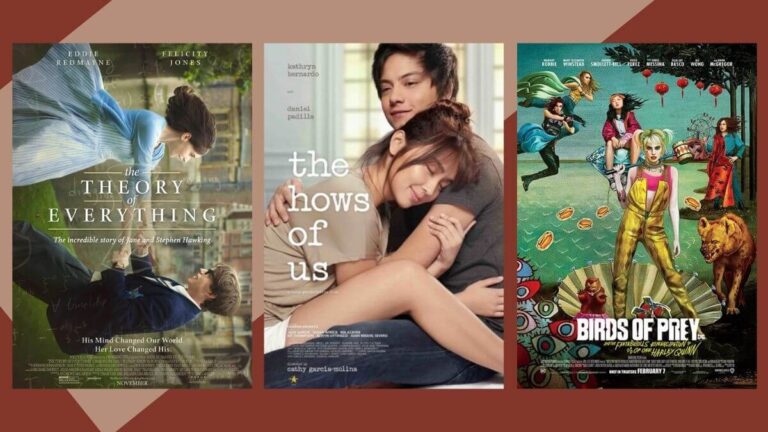 Isn’t it a bummer when you see your favorite movie already playing halfway through when you turn on the TV? Fret not! From rom-com and action to horror and thriller, we’re giving you a heads up on all the must-watch movies on TV from May 31 to June 6, 2021.

Ex With Benefits
(3:30pm, PBO)
Arkisha will do anything to keep her ex in her life.

Passengers
(4pm, Cinemax)
During a voyage to a distant colony planet, Jim’s hypersleep pod malfunctions, waking him up. He and fellow passenger Aurora must work together to prevent their spaceship from meeting with a disaster.

Birds Of Prey And The Fantabulous Emancipation Of One Harley Quinn
(4:30pm, HBO)
After being thrown out in the streets by Joker, Harley struggles to pick herself up. However, Harley teams up with Huntress, Black Canary and Renee Montoya to defeat a gangster and protect a girl.

That Thing Called Tadhana
(11pm, Cinema One)
A woman struggling to meet airline baggage requirements meets a man who comes to her aid. They form a friendship that helps them mend each other’s hearts.

Alvin And The Chipmunks
(5pm, HBO)
Dave Seville teams up with three musically-inclined chipmunks in order to make a mark in the industry. However, Ian Hawk, a greedy record producer, tries to split the group and exploit the chipmunks.

She’s The One
(7pm, Cinema One)
A morning show host realizes what his dreams are after his best friend appears in a romantic viral video.

Jason Bourne
(9pm, FOX Movies)
Jason Bourne, a former CIA agent, is drawn out of hiding by CIA director Robert Dewey. He then sets out to discover more about his past, family and his father’s death.

47 Ronin
(1pm, HBO)
Lord Asano is punished for injuring Lord Kira and asked to commit seppuku. When Kai and the other samurai realise that their master was not at fault, they set out to seek revenge against Lord Kira.

Catch Me If You Can
(6:10pm, Cinemax)
Notorious con artist Frank Abagnale has duped people worth millions of dollars with his masterful art of deception. With his scams getting bolder, he is soon pursued by FBI agent Carl Hanratty.

Pixels
(9pm, FOX Movies)
A special team of arcade gamers is put together to fight a mysterious alien race that watches classic games of the ’80s and presumes them to be a declaration of war.

Paano Na Kaya
(7pm, Cinema One)
Two longtime friends become romantically involved after he gets dumped by a girlfriend.

Happy Death Day
(9pm, FOX Movies)
College student Theresa Gelbman continues to relive the day when she was killed to discover the identity of her murderer.

Final Destination 2
(11:40pm, Cinemax)
After she has a premonition of an accident, Kimberly rushes to save the lives of the people involved. However, one by one, the survivors start dying and she realises that her life is also at risk.

The Secret Life Of Pets 2
(5:55pm, HBO)
At a farm, Max meets the sheepdog Rooster who tries to help him overcome his fears. Back home, Gidget loses Max’s favourite toy, while Snowball tries to rescue a white tiger cub, Hu.

Unbreakable
(7pm, Cinema One)
David, a security guard, survives a fatal train accident, only to be tracked down by a man named Elijah Price, who claims that David is blessed with superhuman abilities.

Hotel Transylvania 2
(7:20pm, FOX Movies)
Dracula is concerned for his beloved half-human, half-vampire grandson, Dennis, when he notices that he is not showing any signs of being a vampire.

Child’s Play
(10pm, Cinemax)
Karen buys her son Andy a sought-after doll for his birthday and Andy names it Chucky. Things take a turn for the worse when Andy discovers that Chucky is possessed by the spirit of a serial killer.

The Theory of Everything
(10:40am, FOX Movies)
Stephen Hawking, an excellent astrophysics student working on his research, learns that he suffers from motor neurone disease and has around two years to live.

The House of Us
(7pm, Cinema One)
A girl from a troubled family befriends two younger girls and begins to feel a sense of normalcy as they go adventuring at the seaside.

Scream 2
(10:45pm, Cinemax)
Sidney is in college and once again finds herself the target of a psychotic killer. However, this time, the killer’s murder count is higher and the killings more outrageous.

Jurassic World: Fallen Kingdom
(9pm, FOX Movies)
After a volcano eruption proves to be a threat for the dinosaurs, Owen and Claire reach the defunct Jurassic World, a theme park, to save the animals from extinction.

Joker
(11:15pm, HBO)
Forever alone in a crowd, failed comedian Arthur Fleck seeks connection as he walks the streets of Gotham City. Arthur wears two masks — the one he paints for his day job as a clown, and the guise he projects in a futile attempt to feel like he’s part of the world around him.

The Theory Of Everything