A+E Networks’® first international co-production with Jiangsu Broadcasting Corporation for documentary-drama, Scars of Nanking, won the Daytime Emmy Award for Outstanding Cinematography and earned the nomination for Outstanding Single Camera Editing at the recent 45th Annual Daytime Emmy Awards. The encore telecast of Scars of Nanking is set on 26th May and 5th June at 9:55pm exclusively on HISTORY Asia channel. 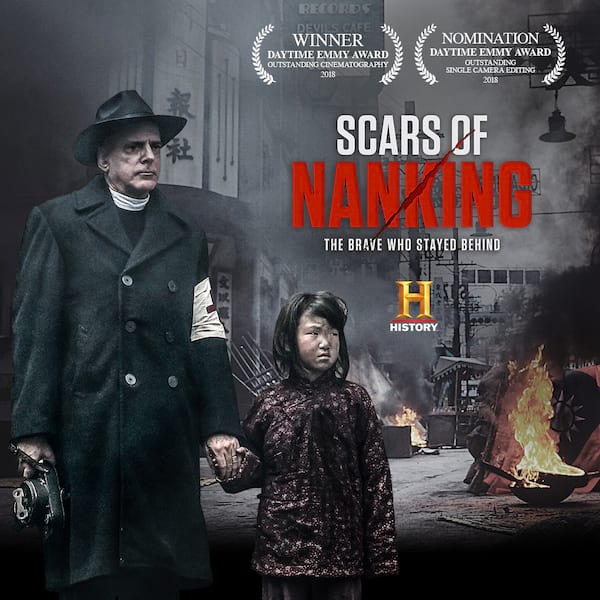 Marking the 80th anniversary of the brutal Nanking Massacre by Japanese invaders during World War II the one-hour docu-drama premiered on December 13, 2017 on HISTORY® in the U.S., HISTORY® Asia and simultaneously on Jiangsu Satellite TV in China.

“We congratulate our partners at Jiangsu on the out-of-the-box success of Scars of Nanking, which marks an historic milestone for A+E Networks as the company’s first co-production in China,” said Edward Sabin, Executive Managing Director of A+E Networks International.

“We are excited to be working with A+E Networks, whose reputation for providing impactful, disruptive content clearly places it among the top providers of both factual and scripted content around the globe. A+E provides the perfect combination of talent and demonstrated acumen required to tell this important story to a mainstream global audience,” said Cao Haibin, General Manager of JSBC Documentary Media Co., Ltd.

In Scars of Nanking, American missionaries struggle to save Chinese civilians from war crimes at the hands of Japanese invaders and to smuggle out evidence of the infamous Nanking Massacre of 1937. Many fled before the invasion. But 22 foreigners did not leave Nanking. This is the story of some of those who chose to stay in the face of grave personal danger—American missionaries, some of them educators, others doctors or ministers, all determined to do what they could to help safeguard a quarter of a million Chinese civilians. Their stories come to life through the letters and diaries they actually wrote during that terrible time.

The docu-drama is also supported with a feature length documentary called Scars of Nanjing: 80 Years After. In this 90-minute special, the traumatic events of Nanking are remembered through Chinese students, massacre survivors, and their descendants, as well as powerful insight from experts and renowned historians Ian Buruma, Daqing Yang, Alexis Dudden and Academy Award nominated filmmaker Christine Choy, all of whom also provide context and commentary for Scars of Nanking.

Scars of Nanking is executive produced by A+E Network’s Christopher Humphrey in Singapore, directed by John Ealer, who also helmed A&E Networks’ acclaimed series The World Wars, and is produced and written by Frederick Rendina, with cinematography by John Cavill and editing by Melanie Foo Campbell.