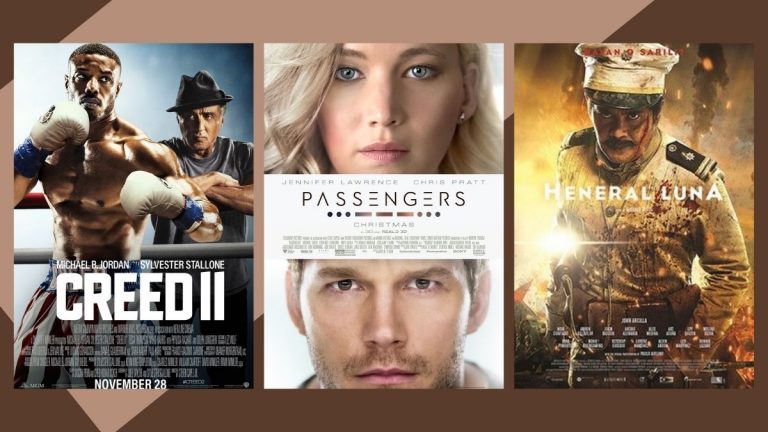 Isn’t it a bummer when you see your favorite movie already playing halfway through when you turn on the TV? Fret not! From rom-com and action to horror and thriller, we’re giving you a heads up on all the must-watch movies on TV from May 24 to 30, 2021.

Barcelona: A Love Untold
(4pm, Cinema One)
While earning a degree in Spain, a young architecture student dealing with grief meets a fellow expatriate trying to escape her past.

Scream
(10pm, Cinemax)
A year after Sidney’s mom is murdered, more murders start to occur. She begins to suspect if these murders are related and tries to find the killer as everyone seems to be a suspect.

Split
(10:50pm, FOX Movies)
Kevin, who is suffering from dissociative identity disorder and has 23 alter egos, kidnaps three teenagers. They must figure out his friendly personas before he unleashes his 24th personality.

Para Sa Hopeless Romantic
(1pm, Cinema One)
A student writer struggles to find a happy ending to her romantic novel after her real-life romance falls apart.

The Intern
(6:35pm, HBO)
Ben Whittaker, a 70-year-old widower, realises that he is not cut out for retirement. He then applies to become a senior intern for a sceptical boss at an online fashion site.

Kung Fu Panda 3
(9pm, FOX Movies)
The Dragon Warrior, Po, has to deal with challenges galore when circumstances compel him to train a bunch of awkward pandas in martial arts so that they can trounce Kai, a wicked supernatural warrior.

The Vow
(5pm, FOX Movies)
Paige meets with a terrible accident which leaves her in a coma. When she wakes up, she doesn’t recognise her husband Leo, who then tries to win her back by courting her again.

And I Love You So
(7pm, Cinema One)
A widow mourning her husband meets two interesting men.

Mama
(11:55pm, HBO)
After their parents’ deaths, two young girls are forced to reside in a house that has a dark and ominous presence. Even after getting rescued, the evil forces follow them to their new home.

Knight And Day
(7:10pm, HBO)
June Havens meets Roy Miller, a lethal operative, in an unlikely encounter and gets entangled in his adventures. She falls in love with him and has to figure out if he is a traitor or a good guy.

Mamma Mia!
(10:50pm, FOX Movies)
As Sophie and her family are busy preparing for her wedding, she secretly invites three men, who were her mother’s lovers in the past, with the hope that one of them is her father.

Heneral Luna
(11pm, Cinema One)
In 1898, Gen. Antonio Luna faces resistance from his own countrymen as he fights for freedom during the Philippine-American War.

Block Z
(5pm, Cinema One)
A group of university students must band together in order to survive a deadly viral disease outbreak.

The Bucket List
(6:15pm, Cinemax)
Two terminally ill men left with only six months to live, decide to explore life and make a bucket list comprising all the things they have never tried before.

Constantine
(9pm, HBO)
Detective Angela approaches Constantine, an exorcist, to help her investigate her twin sister’s death. As he digs deeper, he realises a dark conspiracy which could threaten the world.

10,000 B.C.
(6pm, Cinemax)
D’Leh belongs to the tribe of hunters and gatherers who reside in the mountain range in the Urals. When his tribe is attacked, the love of his life is taken as prisoner and the men as slaves.

Talk Back and You’re Dead
(9:30pm, PBO)
Samantha falls in love with a hot-headed guy named Top, the leader of a gang.

Fast & Furious: Hobbs & Shaw
(11pm, HBO)
US agent Luke Hobbs and British mercenary Deckard Shaw are forced to put their rivalry side and work together to stop a genetically enhanced supervillain.

Starting Over Again
(1pm, Cinema One)
Architecture student Ginny and history professor Marco fall in love, bringing out the best in each other until their break up. Years later, the two meet again on a joint project.

Passengers
(6:50pm, Cinemax)
During a voyage to a distant colony planet, Jim’s hypersleep pod malfunctions, waking him up. He and fellow passenger Aurora must work together to prevent their spaceship from meeting with a disaster.

Birds Of Prey And The Fantabulous Emancipation Of One Harley Quinn
(7:15pm, HBO)
After being thrown out in the streets by Joker, Harley struggles to pick herself up. However, Harley teams up with Huntress, Black Canary and Renee Montoya to defeat a gangster and protect a girl.