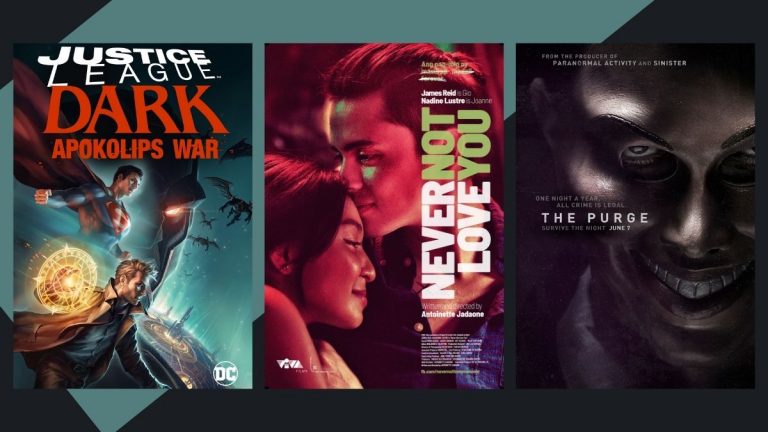 Isn’t it a bummer when you see your favorite movie already playing halfway through when you turn on the TV? Fret not! From rom-com and action to horror and thriller, we’re giving you a heads up on all the must-watch movies on TV from April 19 to 25, 2021.

Grown Ups
(3:20pm, FOX Movies)
Five childhood friends take their families for a weekend trip to a lake house in their hometown, where they reunite to attend the funeral of their former high school basketball coach.

The Lord Of The Rings: The Two Towers
(5:05pm, HBO)
Frodo and Sam arrive in Mordor with the help of Gollum. A number of new allies join their former companions to defend Isengard as Saruman launches an assault from his domain.

Justice League Dark: Apokolips War
(7pm, Cinemax)
Following the decimation of Earth, the Justice League regroups to take on Darkseid and save the remaining survivors.

Suddenly It’s Magic
(7pm, Cinema One)
An actor and a baker experience heartbreak but find love and solace together.

The Angry Birds Movie
(5:10pm, FOX Movies)
Red, Chuck and Bomb have always been the outcasts within a community of flightless birds on an island. But when mysterious green pigs intrude the island, it is up to them to figure out the reason.

The Purge
(9pm, HBO)
The members of a wealthy family find themselves in trouble when they are held hostage by a murderer during the Purge, a period where all criminal activity is legalised.

Final Destination 3
(10pm, Cinemax)
Wendy saves her friends’ lives when she has a premonition that the roller coaster they are about to get on will crash. However, each person in the group starts to die in horrifying ways.

She’s The One
(1pm, Cinema One)
A morning show host realizes what his dreams are after his best friend appears in a romantic viral video.

Child’s Play (2019)
(3:25pm, FOX Movies)
Karen buys a high-tech doll called Chucky for her son Andy on his birthday. However, horrific events follow as the doll reveals its ominous tendencies.

Clueless
(5:55pm, HBO)
Cher is a rich high-school student who is learning to cope with adolescence and its problems. She also helps a new student gain popularity and in the process discovers her own feelings for someone.

Harry Potter And The Goblet Of Fire
(3pm, HBO)
When Harry is chosen as a fourth participant of the inter-school Triwizard Tournament, he is unwittingly pulled into a dark conspiracy that endangers his life.

Five Feet Apart
(5:20pm, FOX Movies)
Seventeen-year-old Stella spends most of her time in the hospital as a cystic fibrosis patient. Her life is full of routines, boundaries and self-control — all of which get put to the test when she meets Will, an impossibly charming teen who has the same illness.

Forever And A Day
(7pm, Cinema One)
A young man falls in love with his new friend, but she pushes him away.

Meet Me in St. Gallen
(1pm, PBO)
Celeste and Jesse have a one-night stand and then go their separate ways, only to end up meeting again in St. Gallen, Switzerland.

In Time
(1:30pm, HBO)
In a future where people stop ageing after 25 and need to buy time to live, the rich become immortal while others cease to exist. So, Will is on the run with a hostage in a desperate bid to survive.

Kasal, Kasali, Kasalo
(5pm, Cinema One)
After being forced to migrate to the U.S., Jed proposes to Angie and, hastily, they plan the wedding, which causes a lot of conflict between their families.

The Green Hornet
(5:20pm, FOX Movies)
After his father’s death, Britt inherits the largest media company in Los Angeles. He teams up with Kato to fight crime but ends up becoming the target of an underworld gangster, Benjamin Chudnofsky.

Les Miserables (2012)
(2:05pm, HBO)
Jean Valjean, a prisoner, breaks parole in order to start life anew. He soon becomes the caretaker of a young girl but his past comes back to catch up with him.

Siargao
(7pm, Cinema One)
A love triangle plays out between a rock singer and two women on the island of Siargao.

Angel Has Fallen
(8pm, Cinemax)
Mike Banning, a secret service agent, is assigned to protect the US president. Things take a turn when Mike is falsely accused of carrying an attack on the president while on a fishing trip.

Despicable Me 2
(5:50pm, HBO)
When a new criminal comes to town, the Anti-Villain League decides to hire Gru in order to fight him off. While Gru initially refuses, he eventually agrees after his aide goes back to his evil ways.

Never Not Love You
(9:30pm, PBO)
Two young lovers meet and fall in love. Together they build a life until career opportunities bring them out of the country. Out of the comforts of home and with individual careers going different directions.

The Lord of The Rings: The Two Towers

Forever And A Day