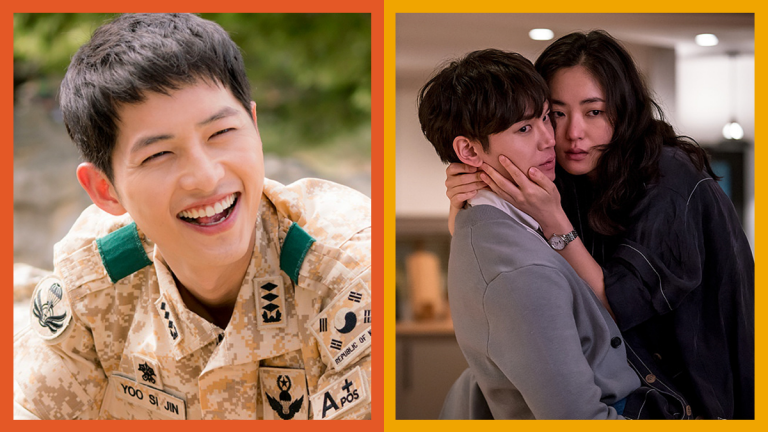 Wondering where else you can watch your favorite 'Vincenzo' stars? We got you covered.

If you’ve been watching every new episode of Vincenzo week after week, then you’re probably like us who has completely fallen in love with our two leads and the psychopathic villain they’re fighting!

That is why we’re giving you a list of K-dramas and films starring the three leads — Song Joong Ki, Jeon Yeo Bin, and Ok Taecyeon — to help you deal with the lack of Vincenzo content while waiting for the new episode! Here are 12 titles to check out right now:

Sungkyunkwan Scandal centers on Kim Yoon Hee, a smart young woman who decides to take the men’s-only national exam using her brothers name to pay off their debts. When she passes the exam, she enters Sungkyunkwan University, where she must hide her true nature. It’s there that she meets and befriends Lee Seon Joon, Goo Yong Ha, and Moon Jae Shin.

This popular K-drama tells the love story between a doctor and a special forces soldier. It follows Kang Mo Yeon, a cardiothoracic surgeon whose life changes when she meets Yoo Si Jin, the captain and team leader of the Alpha team. The two of them will then bond and work together, overcoming the odds against them.

Song Joong Ki stars alongside Song Hye Kyo in this drama. Here, he plays Yoo Si Jin, the captain who believes in protecting and defending his country, his men’s honor, and the people who need help.

Arthdal Chronicles is a drama that takes place in the fictional land of Arthdal during ancient times. It tells the story of the heroes of the land as they all try to overcome their struggles and create their own legends.

Song Joong Ki stars in this drama as the warrior Eun Seom, whose goal is to protect the people he loves from the giant civilization. Starring alongside him is Jang Dong Gun, Kim Ji Won, and Kim Ok Bin, who play Ta Gon, Tan Ya, and Tae Al Ha, respectively.

Song Joong Ki also starred as the lead in the recently-released Netflix sci-fi Space Sweepers. In this film, he plays Tae Ho, who is one of the people manning Spaceship Victory. Alongside Captain Jang, Tiger Park, and Bubs, they go on a quest to bring a human-like robot back to those who were looking for it. What they don’t realize is that this will also bring them on an adventure that would lead them to save the world.

Be Melodramatic is a quirky slice-of-life drama centering on three women — Im Jin Joo, Lee Eun Jung, and Hwang Han Joon — who are all approaching their 30s. It follows their lives as they all try to make it and be successful in the Korean entertainment industry, all while dealing with their personal issues, love lives, and friendships.

Jeon Yeo Bin stars in this drama as Lee Eun Jung, a documentary filmmaker who’s also in the process of healing from the death of her boyfriend. Joining her in this drama are Chun Woo Hee, Han Ji Eun, Ahn Jae Hong, and Gong Myung.

ALSO READ
K-Drama Files: ‘Be Melodramatic’ is A Quirky and Relatable Drama About Turning 30

Jeon Yeo Bin also starred in the movie After My Death as Lee Yeong Hee, who was the last person to see the high schooler Kyung Min before she went missing. As her friends accuse and turn their backs on her, she tries to prove herself innocent, eventually leading her to make an unexpected decision.

Night in Paradise is another film which starred Jeon Yeo Bin. It follows Park Tae Goo, a gangster who goes to Jeju Island where he must lay low after taking a hit against the boss of a rival gang. He hides in the farm of Kuto and his niece Jae Yeon, who he ends up bonding with over their proximity to death.

In this film, Jeon Yeo Bin plays Jae Yeon, Kuto’s terminally ill niece. Also starring here are Uhm Tae Goo, Jeon Yeo Bin, and Cha Seung Won. The film, which was directed by Park Hoon Jung, is the only Korean film to screen out of competition at the 77th Venice International Film Festival.

Where to Watch: Netflix (launching on April 9)

ALSO READ
Live by the Gun: A Movie Review of ‘Night in Paradise’

Save Me centers on Im Sang Mi, who moves to Muji-gun with her family to start a new life. There, they are approached by Baek Joong Ki — the Spiritual Father of the Goosunwon — who offers to help them in exchange for their stay in the religious group’s headquarters. What the family doesn’t know that upon saying yes, they will also end up getting sucked into the pseudo-religious cult.

Ok Taecyeon joins Seo Ye Ji, Woo Do Hwan, and Jo Sung Ha as the leads of the drama. Here, he plays Han Sang Hwan, one of Sang Mi’s classmates who help her escape the cult. Jeon Yeo Bin also stars in this drama as Hong So Rin, one of the followers of the cult who is also harboring a secret.

ALSO READ
K-Drama Files: ‘Save Me’ is a Thriller Drama on Cults and Blind Faith

Dream High is a drama about 6 students at Kirin Art High School with dreams of becoming music stars. It follows them as they work hard to develop their singing, songwriting, and dancing skills all while maturing with each other.

In this title, Ok Taecyeon plays Jin Gook, a student who’s in a bad relationship with his father, who’s also the Mayor.

Taecyeon also starred in the 2013 drama Who Are You, where he plays Cha Gun Woo, a detective who only believes in solid evidence. Together with So Yi Hyun’s Yang Shi On, who has the ability to see spirits, the two detectives help the spirits attached to objects at a lost-and-found center find and rest in peace.

Bring It On, Ghost

Ok Taecyeon stars in Bring It On, Ghost as Park Bong Pal, a boy who can see and hear ghosts. He becomes an exorcist as a way to earn money, so he can get a procedure that will take his ability away. Things change, however, when he meets Kim Hyun Ji, a wandering spirit. She convinces him to let her move into his house, so they can be ghost-fighting partners.

House of the Disappeared

House of the Disappeared is a movie based on the Venezuelan film The House at the End of Time. It’s about Kim Yun Jin’s Mi Hee, an ordinary housewife who is imprisoned after the death of her husband and the disappearance of their son. She returns to the house 25 years later to investigate the mystery surrounding the 2 incidents. Here, Ok Taecyeon plays Priest Choi, someone who has an unhealthy interest in Mi Hee’s case.

Homestream images are from Netflix and JTBC.

House of the Disappeared

Bring It On, Ghost