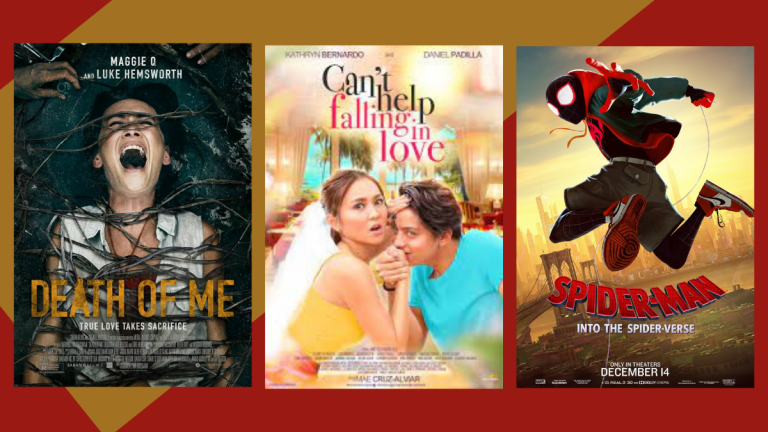 Isn’t it a bummer when you see your favorite movie already playing halfway through when you turn on the TV? Fret not! From rom-com and action to horror and thriller, we’re giving you a heads up on all the must-watch movies on TV from March 22 to 28, 2021.

Panic Room
(12:45pm, FOX Movies)|
Meg and Sarah hide in a panic room in their house when intruders break in. Unfortunately for them, the intruders want something that is hidden inside the room and will stop at nothing to claim it.

Men In Black: International
(2:55pm, HBO)
Agent M, a probationary member of the MIB, teams up with Agent H and uncovers a sinister plot that reveals a traitor in the organisation aiding an alien invasion.

Spider-Man
(8pm, Cinemax)
Peter Parker’s life changes when he is bitten by a genetically altered spider and gains superpowers. He uses his powers to help people and finds himself facing the Green Goblin, an evil maniac.

Just Go With It
(12:20pm, HBO)
A plastic surgeon convinces his assistant to join him along with his young girlfriend on a trip to Hawaii and pose as his ex-wife to cover up a lie, but he ends up complicating the situation further.

Ava
(7:15pm, FOX Movies)
An assassin becomes marked for death by her own black ops organization after questioning orders and breaking protocol.

My Rebound Girl
(9pm, Cinema One)
A young woman who is tired of being the rebound girl makes rules for herself to avoid that situation. She is immediately challenged when she makes a connection with another heartbroken young man.

Hancock
(2:15pm, Cinemax)
John Hancock is a reckless superhero whose chaotic efforts have made him wildly unpopular. However, his life changes when a PR expert offers to help him improve his public image.

The Lake House
(3:35pm, HBO)
Love blooms when Kate, a doctor, exchanges letters with Alex, an architect who is fed up with his life. Unknown to them, they lead lives two years apart.

She’s Dating The Gangster
(7pm, Cinema One)
Seventeen-year-old Athena Dizon unwittingly plays a trick on resident heartthrob and bad boy Kenji de los Reyes. All of a sudden, she finds herself pretending to be his girlfriend to make an ex jealous; however, she falls in love with him.

World War Z
(10:45pm, FOX Movies)
Gerry, a former United Nations employee, unexpectedly finds himself in a race against time as he investigates a threatening virus that turns humans into zombies.

The Wedding Singer
(10am, Cinemax)
Robbie, a wedding singer, meets Julia, a waitress, at a reception and the two hit it off. He soon learns that she is engaged to another man, who treats her like garbage, and must stop their wedding.

Love Actually
(3:30pm, HBO)
Eight London couples try to deal with their relationships in different ways. Their tryst with love makes them discover how complicated relationships can be.

Through Night and Day
(9:30pm, PBO)
The film revolves around an engaged couple whose relationship is tested while on a prenup trip to Iceland.

Death Of Me
(3:50pm, FOX Movies)
A vacationing couple must unravel the mystery behind a strange video that shows one of them killing the other.

John Wick Chapter 3: Parabellum
(10pm, HBO)
John Wick is declared excommunicado and a hefty bounty is set on him after he murders an international crime lord. He sets out to seek help to save himself from ruthless hitmen and bounty hunters.

The Mummy Returns
(1:35pm, Cinemax)
When an archaeologist couple’s son finds the Bracelet of Anubis, it locks onto his wrist. A cult resurrects Imhotep, an evil Egyptian high priest, who needs the bracelet to defeat the Scorpion King.

Praybeyt Benjamin
(5pm, PBO)
When civil war breaks out in the Philippines, a gay dance teacher is forced to join the military in order to spare his ailing father.

It Takes A Man and A Woman
(7pm, Cinema One)
The relationship between Miggy and Laida didn’t last, and neither did Miggy’s business success. When Laida returns to help with a presentation to MET, old feelings come to the surface.

The Grudge (2020)
(7:20pm, FOX Movies)
Muldoon, a detective and single mother, investigates a murder in a suburban neighbourhood. Soon, she realises that the house in which the incident occurred is cursed by an evil force.

The Karate Kid (2010)
(11:10am, FOX Movies)
Dre, a young boy, finds himself bullied by Cheng, a rebellious kung fu prodigy at his school. However, things change after he befriends Mr Han, a maintenance man, who happens to be a kung fu expert.

Angel Has Fallen
(1:50pm, Cinemax)
Mike Banning, a secret service agent, is assigned to protect the US president. Things take a turn when Mike is falsely accused of carrying an attack on the president while on a fishing trip.

Now That I Have You
(3pm, Cinema One)
A hopeless romantic and a skeptic who does not believe in love and romance meet on a train.

Spider-Man: Into The Spider-Verse
(3:10pm, HBO)
After gaining superpowers from a spider bite, Miles Morales protects the city as Spider-Man. Soon, he meets alternate versions of himself and gets embroiled in an epic battle to save the multiverse.

Birds Of Prey And The Fantabulous Emancipation Of One Harley Quinn
(9pm, HBO)
After being thrown out in the streets by Joker, Harley struggles to pick herself up. However, Harley teams up with Huntress, Black Canary and Renee Montoya to defeat a gangster and protect a girl.

Now That I have You